Considered the most remote and isolated inhabited island in the world, we feel the five to six-hour flight from Santiago to Rapa Nui to be well worth the effort. Easter Island is 3,512 km away from South America, with the nearest inhabited island 2, 075 km away. Among the most iconic UNESCO World Heritage Sites anywhere, Easter Island was originally settled by Polynesian navigators in approximately 300 AD. The oldest recorded name of the island is Te Pito o te Henua which means “The End of The World”. The “Easter” Island name was actually coined by Dutch explorers in 1722.

Notable for the island’s 887 massive moai stone statues which sit atop ahu (ceremonial stone platforms), the many unique hiking activities make a visit here exhilarating both physically and spiritually. The moai were quarried and skillfully carved out of porous volcanic rock around 1400 – 1650, in order to serve as sacred ancestral totems. The statues are all similar — legless, long-eared male torsos and heads. Their main difference is in their sizes, typically spanning from 15 to 20 feet, but with some as tall as 40 feet. When hiking in some of the more remote areas, you will see no other human being and enjoy blissful silence and solitude. A Brief History of Easter Island

The Rapa Nui’s vibrant civilization peaked in the late 17th-century when the population was at a high of 15,000. Unfortunately, in the decades that followed ecocide, environmental degradation, conflict over land, and the spread of diseases from arriving foreigners devastated the population. By the late 1800s, there were less than 100 native people left on the island. Through this, many moai were toppled from their ahu and the statues left today were restored in the last 100 years.

The Chilean government took charge of the island in 1953, continuing imperial rule over the people. It was not until 1967 when the establishment of a commercial flight between Santiago and Tahiti, with Rapa Nui as a refueling stop, opened up the island to the world. 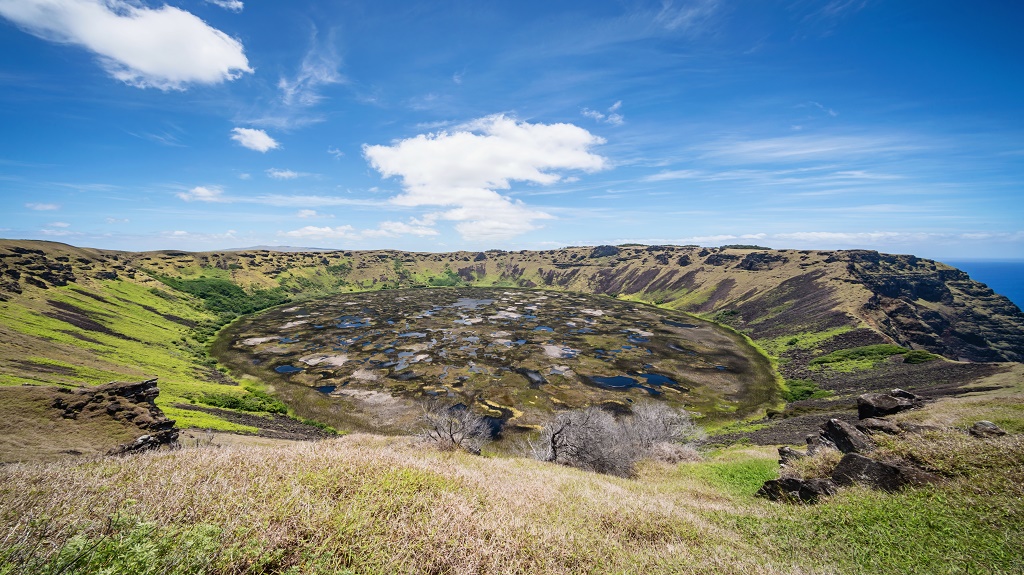 Known as the largest volcanic crater of Easter Island, this natural wonder possesses its own microclimate, where figs and vines prosper, yielding lush and spectacular colors of the earth. Orongo is the prime archaeological site within Rano Kau, an ancient ceremonial village sitting on a narrow strip between the Rano Kau crater and a cliff that dives 984 feet into the Pacific Ocean. Enjoy a spectacular view while immersing yourself in an ancient civilization. Anakena Beach is one of the only beaches on Easter Island that boasts idyllic white sands. With the Pacific Ocean and coconut trees as your backdrop, this true paradise is complemented with several moai statues as a glaring reminder of its ancient history. From there, you will trek along the northwest coast (void of roads) passing Easter Island’s impressive ruins to Hanga Roa, which is regarded as the most outstanding coastal walk in the South Pacific! A staggering 397 maoi statues can be seen at the quarry of Rano Raraku, a truly mystical sight, where you will see these carved stones in various stages of completion. Access to this other-worldly site is highly regulated for the sake of preservation. While you may want to marvel in this place for an entire day, we recommend that you hike down the Ahu Tongariki trail to witness 15 magnificent statues, along with the yet-to-be-deciphered petroglyphs. 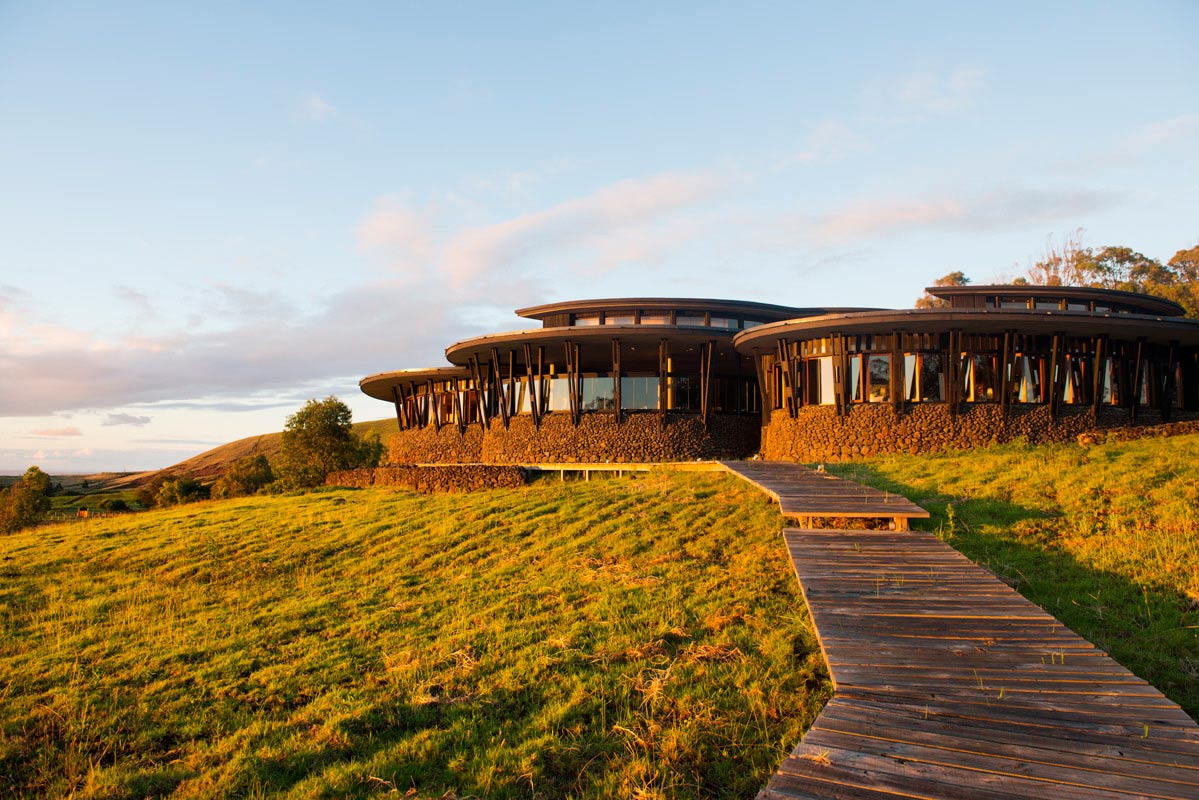 Set on a hillside overlooking the Pacific Ocean, the eco-friendly, 30-room Explora Rapa Nui is the only quality luxury accommodation in Easter Island. The lodge carries the noteworthy LEED certification (Leadership in Energy and Environmental Design). Designed in a somewhat spartan and minimalist style, all rooms enjoy ocean views featuring pine and wood paneled walls and earth-tone concrete floors. The bathrooms come with hydromassage soaking tubs and separate rainfall showers — very nice after an afternoon hike! Other amenities include a bar, a restaurant with a seafood-oriented and locally-sourced menu, a nice size pool, and a spa with a sauna and jacuzzi. A big plus at Explora is its expert, multi-lingual local guides. The guides offer over 20 different hiking and biking exploration opportunities.