Rudyard Kipling aptly expressed the beauty of this place as “the embodiment of all things pure.”—we fully agree! The Taj Mahal is truly one of the iconic sights of the world and is considered the world’s finest example of Mughal architecture, blending Persian and Turkish styles. It is a monument of love built by the Mughal Emperor Shah Jahan in 1632 for his Queen Mumtaz Mahal to enshrine her mortal remains. For 17 years, 20,000 men labored day and night to build this masterpiece that has held the world awestruck ever since. It is visited today by more than three million people who visit Agra each year. Bev, Zen, and I feel the Taj Mahal is one of the very few places in the world where the reality of seeing the monument actually surpasses all hyperbole—and even the most beautiful representations! 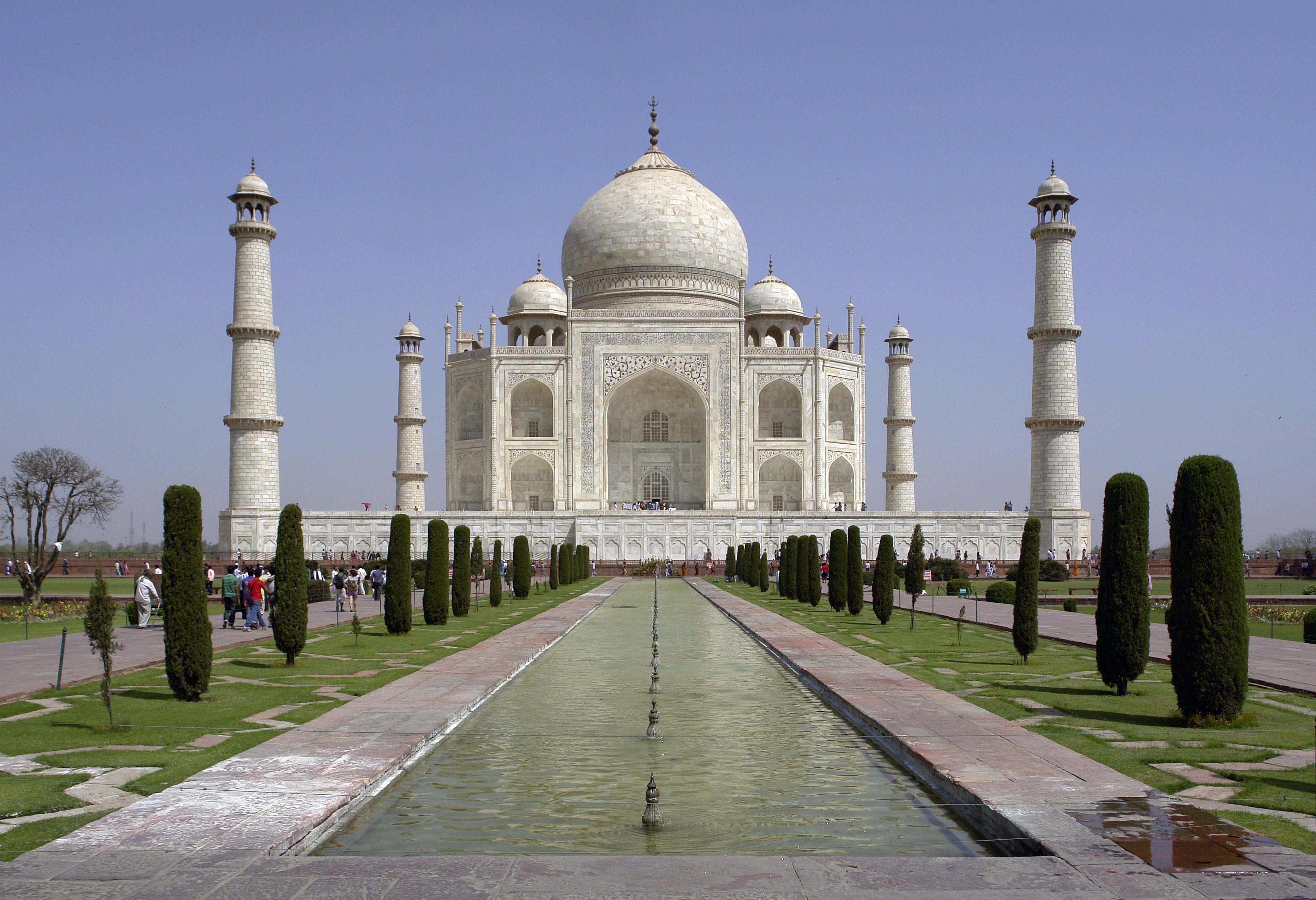 The Taj Mahal is located on the right bank of the Yamuna River in a vast Mughal garden that encompasses nearly 17 hectares (42 acres), in the Agra District in Uttar Pradesh. It was built by Mughal Emperor Shah Jahan in memory of his wife Mumtaz Mahal with construction starting in 1632 AD and completed in 1648 AD, with the mosque, the guest house and the main gateway to the south, the outer courtyard, and its cloisters were added subsequently and completed in 1653 AD. The existence of several historical and Quranic inscriptions in Arabic script has facilitated setting the chronology of the Taj Mahal.

Shah Jahan ruled from 1628 to 1658, a Golden Age of the Mughal dynasty. As the story goes, he was devoted to Mumtaz Mahal (variously translated as “jewel of the palace” or “chosen of the palace”) and trusted her as a confidante. When she died in 1631 giving birth to their 14th child, he was devastated. In commemoration of their eternal love and his deep grief, he set out to build a wonder of the world, “a splendor for his sorrow,” as the English poet Sir Edwin Arnold later wrote.

Shah Jahan spared nothing, drawing on his empire’s deep financial resources and the artistic talent that had flocked to his court. According to a 1904 book by E.B. Havell, an influential English art historian, “The master-builders came from many different parts,” including Baghdad, Delhi, Asiatic Turkey, Samarkand, Kannauj, and Shiraz. Moreover, “every part of India and central Asia contributed to materials; Jaipur, the marble; Fatehpur Sikri, the red sandstone; the Panjab, Jasper; China, the jade and crystal; Tibet, turquoises; Ceylon, lapis lazuli and sapphires; Arabia, coral, and cornelian; Panna in Bundelkund, diamonds; Persia, onyx, and amethyst.” The Taj Mahal is considered to be the greatest architectural achievement in the whole range of Indo-Islamic architecture. Its recognized architectonic beauty has a rhythmic combination of solids and voids, concave and convex, and light shadow; such as arches and domes, which increases the aesthetic aspect. The color combination of lush green scape reddish pathway and blue sky over it showcases the monument in ever-changing tints and moods. The relief work in marble and inlay with precious and semi-precious stones make it a monument apart.

The uniqueness of the Taj Mahal lies in some truly remarkable innovations carried out by the horticulture planners and architects of Shah Jahan. One such genius planning is the placing of the tomb at one end of the quadripartite garden rather than in the exact center, which added rich depth and perspective to the distant view of the monument. It is also one of the best examples of raised tomb variety. The tomb is further raised on a square platform with the four sides of the octagonal base of the minarets extended beyond the square at the corners. The top of the platform is reached through a lateral flight of steps provided in the center of the southern side. The ground plan of the Taj Mahal is in a perfect balance of composition, the octagonal tomb chamber in the center, encompassed by the portal halls and the four corner rooms. The plan is repeated on the upper floor. The exterior of the tomb is square in plan, with chamfered corners. The large double storied domed chamber, which houses the cenotaphs of Mumtaz Mahal and Shah Jahan, is a perfect octagon in a plan. The exquisite octagonal marble lattice screen encircling both cenotaphs is a piece of superb workmanship. It is highly polished and richly decorated with inlay work. The borders of the frames are inlaid with precious stones representing flowers executed with wonderful perfection. The hues and the shades of the stones used to make the leaves and the flowers appear almost real. The cenotaph of Mumtaz Mahal is in the perfect center of the tomb chamber, placed on a rectangular platform decorated with inlaid flower plant motifs. The cenotaph of Shah Jahan is greater than Mumtaz Mahal and installed more than thirty years later by the side of the latter on its west. The upper cenotaphs are only illusory and the real graves are in the lower tomb chamber (crypt), a practice adopted in the imperial Mughal tombs.

“It seems a little obvious to choose the Taj Mahal, but I was very struck when I took my two sons there how their response to it was the same as mine had been when I first saw it. That wasn’t until I was an adult (even though I grew up in India, we somehow never went to Agra) and so like everyone else I’d just seen a million reproductions – photographs, calendars, biscuit tins…And the thing that impressed me was how much more extraordinary it was than any representation of it, in a way that you wouldn’t say about, for example, the Mona Lisa, which seems disappointing when you see it. I was stunned that when you see this very familiar object, it’s as if you’d never seen it before. Modern thinking says the constant reproduction of an image devalues the original. But with the Taj, the original exceeds all the reproductions.

The building itself left my skepticism in shreds, however. Announcing itself as itself, insisting with absolute force on its sovereign authority, it simply obliterated the million counterfeits of it and glowingly filled, once and forever, the place in the mind previously occupied by its simulacra.

And this, finally, is why the Taj Mahal must be seen: to remind us that the world is real, that the sound is truer than the echo, the original more forceful than its image in a mirror. The beauty of beautiful things is still able, in these image-saturated times, to transcend imitations. And the Taj Mahal is, beyond the power of words to say it, a lovely thing, perhaps the loveliest of things..”

Agra is an approximately 4-hour drive or 2-hour train ride from Delhi.