The Japanese Concept of “Shinrin-Yoku” or “Forest Bathing”

The Japanese concept of “Shinrin-Yoku” or “forest bathing” originated in Japan in the early 1980s as a natural therapy to alleviate the pervasive stress of Japan’s growing urban office culture. There’s an emerging consensus in science to increase the outdoor nature experience. Scientists have repeatedly found that human anticancer natural killer cells significantly increase after walks in a forest. In one such study, published in 2010 in the Journal of Biological Regulators and Homeostatic Agents, the number and activity of killer cells increased in a group of twelve healthy men after two walks, each two hours long, in a one-day trip to a forest park in the Tokyo suburbs. So did anti-cancer proteins, according to the research led by Qing Li, an associate professor at the Nippon Medical School. 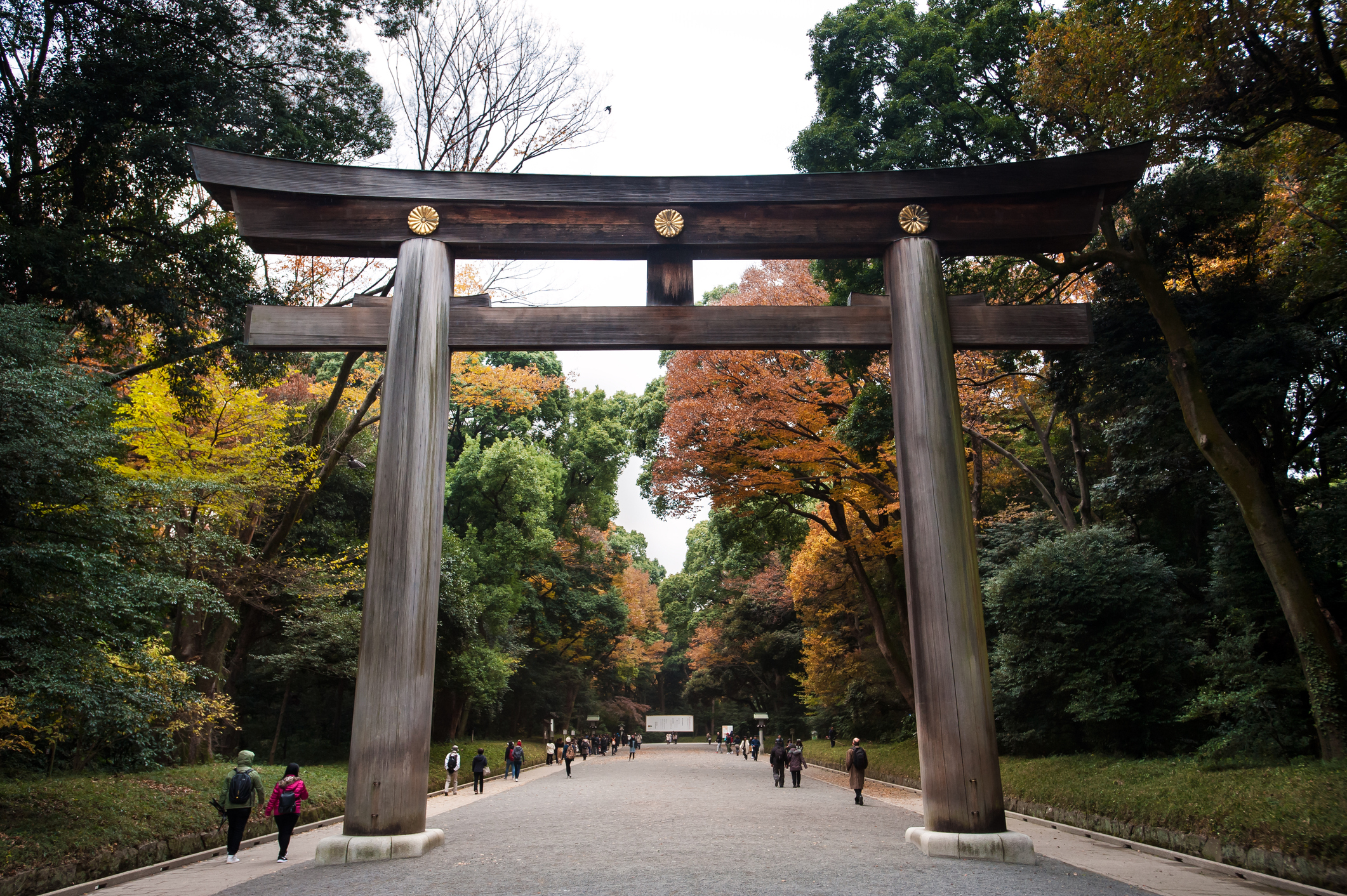 Torii Gate at the entrance to Meiji Shrine

We found the expansive, green Meiji Shrine, Tokyo’s greatest Shinto shrine, constructed in 1920, to be the ideal forested enclave to practice our Lynch family’s version of “Shinrin-Yoku”. When entering Meiji, you pass a towering 39 foot wooden Torii gate, marking the shrine’s entrance. The torii wood was actually created from 1500-year-old Taiwanese cypress!  Having planted more than 100,000 trees here nearly 100 years ago, Meiji’s 172-acre forest is considered sacred with many forested paths to meander and fully enjoy your own forested bathing experience. The oldest road mentioned in Japanese records, this trail stretches approx. 6.8 mi from Omiwa Shrine to Isonokami Shrine in Tenri City. Though the trail includes a couple of short steep hills, by and large, this is a flat, gentle hike. The trail’s most popular northern section stands the historic Isonokami Shrine, dating back to the 5th and 6th centuries, surrounded by green forests and even free-range chickens! Bamboo Forest prior to Utsunoya Pass on Old Takaido Trail

With Hakone being an important checkpoint to control traffic into Edo (Tokyo) during the Edo feudal period  Depending on your time available the hike may take 1-3 hrs, with light to medium difficulty. With parts surrounded by majestic cedar trees, the best-preserved section leads to Moto-Hakone via Amazake Chaya Tea House, serving hot sweet rice wine(!) Hike through the lush Maruyama Senmai rice fields in Kumano.

Japan is crisscrossed with ancient pilgrimage routes, many of which are still traversed by pilgrims. In the wilds of southern Kansai, the Kumano Kodo links three Shinto shrines with a network of mountainous trails, punctuated by welcoming rest stops and inns. It’s the closest you’ll come to Nepal-style ‘teahouse’ trekking in Japan. Nearby, on Shikoku, the 88 Temple Route is Japan’s most famous Buddhist pilgrimage – tackle it on foot, by bicycle, or on a bus.

For over 1000 years pilgrims have traveled this sacred series of trails. From ancient times the Japanese believed the wilds of the Kii Peninsula to be inhabited by “kami” Shinto deities. When Buddhism swept Japan in the 6th century, these “kami” became “gongen” a manifestation of the Buddha; another example of Japan’s unique mix of  Shintoism and Buddhism! Fushimi is perhaps our favorite shrine in Japan, the Fushimi Inari Taisha! (Fushimi is featured at the beginning of the film, “Memoirs of Geisha”) Dating back to the 8th century, the shrine includes a wandering pathway around 3 miles up the mountain lined with hundreds of beautiful red torii, now faded to look orange. Depending on how high you walk along the pathway, this can be a long, somewhat taxing trek. Much less crowded than the other shrines, Fushimi’s natural surroundings seem serene and mystical. Based on its growing popularity, walking up the pathway early in the morning is an ideal time to visit this wonderful place. Bev, Zen, and I very much enjoy the eerie, magical ambiance of Fushimi.

Fushimi is the most famous of several thousand shrines dedicated to Inari across Japan. Inari is the Shinto god of rice, and foxes are believed to be his messengers, hence the many fox statues found along the pathway. Many of the menacing kitsune statues have a symbolic key to a rice granary held in the mouth, and most of the statues are adorned with a red votive bib called a yodarekake. The ten’no no yodarekake, or “drooling bib for the Emperor” was a scarf worn inside the kimono, but the ‘yodare-kake’ or ‘suga’ used at Inari most likely symbolizes a Samurai throat protector of lamellar armor, scale plates, or chain mail. Despite the 3 ½ hour travel time from Kyoto (Shinkansen-subway-train-cable car), we thoroughly enjoyed our brief stay in Koyasan. Founded in the 9th century, Koyasan is home to Shingon Buddhism and is considered one of Japan’s holiest mountains ( a truly otherworldly place).

Koyasan’s Okuno-in Cemetery temple grounds we found to be most interesting. We walked along an eerie, winding cobbled path lined by tall cypress trees with an estimated half-million tombs set on both sides. Many noteworthy and peculiar individuals are interred here, including the White Ant Memorial built by a pesticide company to honor the thousands of ants that they exterminated! Click here to read our in-depth analysis of Koyasan.

A few other trails on the island are:

The Koyasan Choishi Michi Trail is the original approach to Koyasan, beginning at Kudoyama Station on the Nankai Koya Line. The trail is marked by stone signposts (choishi) which stand every few hundred meters along the path so that pilgrims can find their way. The markers are numbered (in kanji) in descending order with number one at Koyasan and are formed to represent the five Buddhist elements: earth, water, fire, air, and void.

The Fudozaka Trail leads to Koyasan from Gokurakubashi Station to Fudozaka-guchi Nyonindo temple hall and at 1.5 miles long, takes about an hour and a half round trip.

The Women Pilgrims Course leads around the perimeter of Koyasan from the Fudozaka-guchi Nyonindo past the ruins of the other Nyonindo to the entrance of Okunoin. It is about 4.3 miles long and takes about 2.5 hours to hike. Yakushima is a subtropical island off the southern coast of Kyushu and part of Kagoshima Prefecture. It is covered by an extensive cedar forest that contains some of Japan’s oldest living trees. Though extensively logged during the Edo Period to produce cedar shingles, the forests have flourished. Yakushima offers many hiking opportunities, including the long trek to the 7000-year-old giant cedar, Jomonsugi in the island’s center, and less arduous hikes in the lush green forest of Shiratani Unsuikyo, a UNESCO World Heritage.

Most notably, the beautifully designed Yakusugi chopsticks originate here, made from Yakusugi cedar that grows on Yakushima Island. The name Yakusugi applies only to trees that are more than 1000 years old! Yakushima Island is a very harsh environment, with heavy rains and frequent typhoons. The island’s granite-based soil, low in nutritional content, makes Yakusugi cedars that survive under these conditions accumulate rich quantities of resin, thus developing a strong, fine-grained quality. Read more about our treasured Yakusugi chopsticks here.